Throughout history, different communities and clans in every culture across the globe celebrated their folklores, beliefs, and histories in different ways, which provided a sense of solace, unity, and shared spirit. It is worth noting that there is no specific occasion or commemoration of queer history within the community in India, where the people celebrate their union with joy, except for this one-of-its-kind event happening in a remote village called Koovagam in the Southern part of India every year. It is an 18-day festival celebrated in an otherwise sleepy village named Koovagam, located some 200 kilometers south of Chennai, in Villupuram District, Tamil Nadu. The festival happens on the surrounding premises of Kuthandavar Temple, which is the nodal point throughout the fest. Also called  Kuthandavar–Aravan Mela, its origins can be traced back to the mythological elements of Hinduism, mainly drawing from the events associated with Lord Aravan from the epic of Mahabharata. The 18-days long trans festival highlights the legends and folklores symbolic of the queer community. According to Hindu Calendar, the days of celebration fall during the month of Chaitra, which usually happens in the Gregorian month of April – May. People identifying themselves as transgender women and transvestites living across India participate in the festival with a great sense of joy and profound spirit of unity. On the 18 days long festival, the signature events happen for two days. 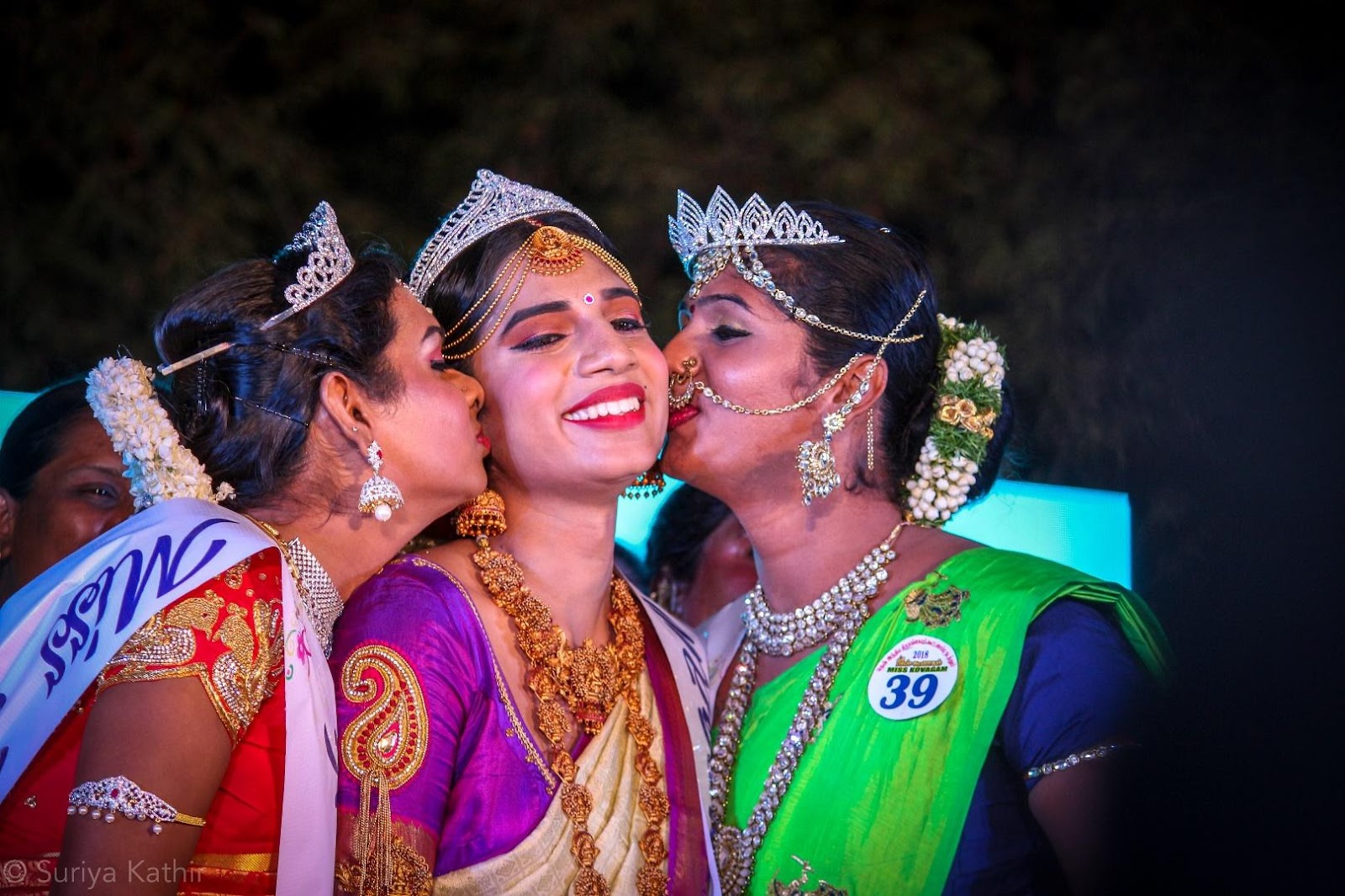 The winner of the beauty pageant also takes pride in getting a moral acknowledgement from the society, of their identities.

According to the Hindu epic Mahabharata, Pandavas must sacrifice a life to Goddess Kali to win the Kurukshetra war against the Kauravas. At this time, Lord Aravan, son of Pandava Arjuna, offered to sacrifice his life for their victory in the battle. His only last wish before death was to get married and experience marital life for once.  Since one can understand that no woman would consent to marry a person who was supposed to die very soon, the next day; the epic quotes that Lord Krishna took the form of a woman named Mohini and in one night, the marriage took place, after that Aravan sacrificed his life on the next day. The festival draws the tradition from this event from the mythological text of the epic Mahabharata and thus the confluence of various transgender women, also called Aravanis, named after Lord Aravan, the deity who made the sacrifice, celebrate the events. Koovagam, located some 25 kilometers from the district headquarters of Villupuram district in Tamil Nadu, is relatively calm and passive like any other village throughout the year except for the month of Chaitra when the festival happens. Although the festival happens for 18 days, the rites happening towards the penultimate days mark the signature events, which sums up the entire happenings of the festival. Across the 16 days of the festival, cultural performances, programs, beauty pageants, trans awareness workshops, HIV/AIDS sensitization workshops conducted by various NGOs, and keynote speeches and discussion roundtables on trans rights and issues by gender activists across the country occupies the limelight of the festival.

Aravanis getting their Thalis or Mangalsutras cut by the priests on the 18th day, denoting widowhood.

On the 17th day, which starts with an upbeat note and spirit surrounded with vibes of wedding and getting married, transgender women and transvestites decorate themselves with traditional, bright-colored saris, glass bangles, and ornaments as Mohinis, which according to Mahabharata, is the manifestation of Lord Krishna as a woman who marries Lord Aravan, before himself getting sacrificed. They visit the Kuthandavar temple on the 17th day to marry Lord Aravan. As per the religious tradition of tying knots to denote the wedlock, priests of the temple tie Mangalsutra (Hindi) or Thali (Tamil) around their necks to establish the marriage. Procession of the deity Aravan and the festive rites following it becomes the source of attraction to the local crowd and the tourists who visit Koovagam on these days.

In sync with the events depicted as per Mahabharata, the night after the wedding, commemorating the sacrifice of Lord Aravan on the 18th day becomes the day of mourning, as the wife, Mohini, who married the latter deity, enters the state of widowhood. The Mohinis, the transgender women and transvestites themselves who are now in the state of widowhood, marked by removing their makeups and changing into white saris, express and vent their loss by disquieting cries of sorrow and bursting out with tears. 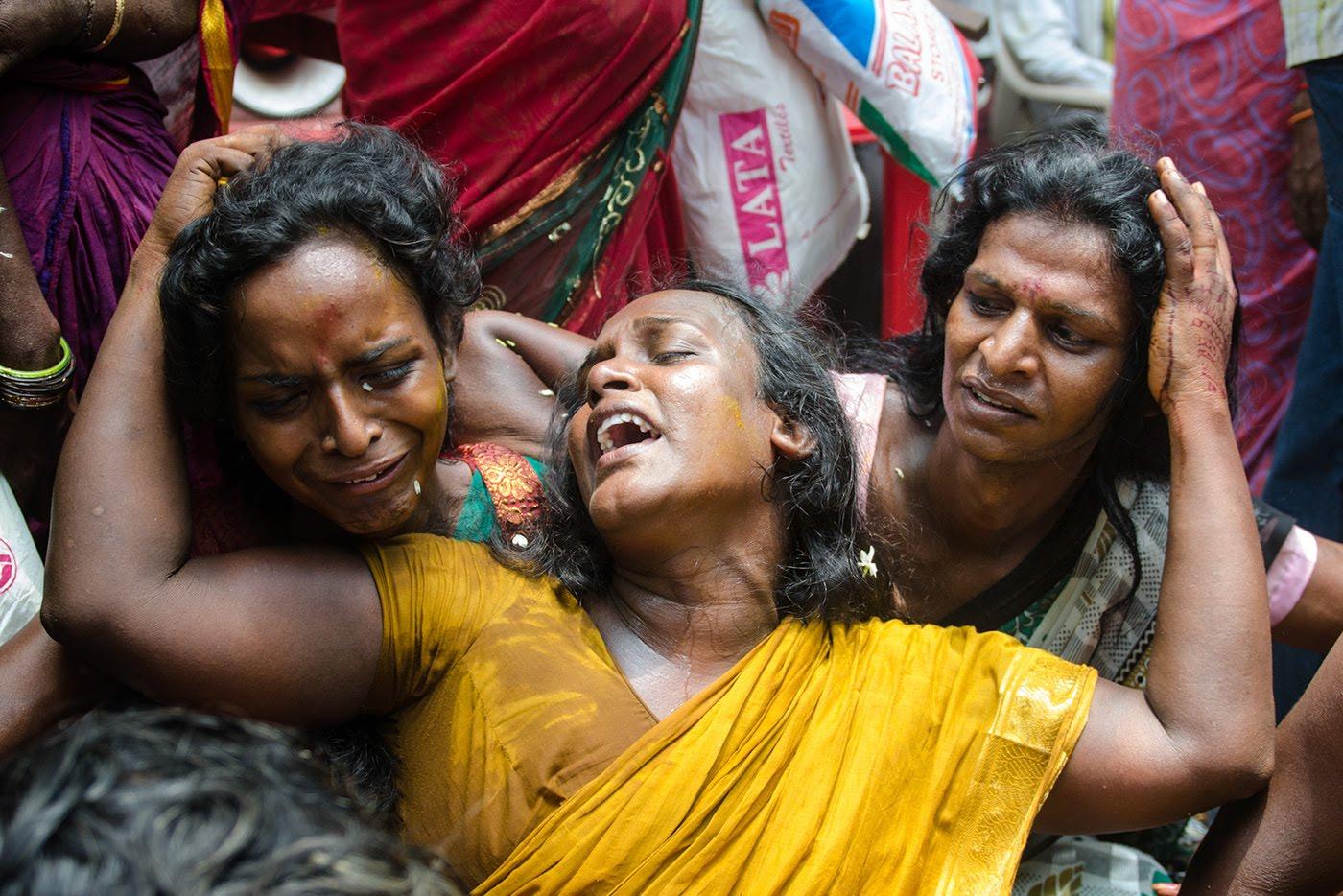 rans women lamenting the sacrifice of Lord Aravan, and expressing their anguish of entering widowhood. The priests who previously tied the knots remove them on the 18th day, followed by the transgender people breaking the glass bangles in groups, marking the end of the ceremony. The spontaneous transition in the course of the festival, from being elated and joyful on the 17th day and dipping to the state of total loss and anguish on the 18th day, demonstrated by the confluence of transgender women and transvestites, remains the center of attraction and attention from the queer community and visitors as well. Koovagam Trans Festival will remain an iconic part of the various socio-cultural traditions and relations associated with the Indian queer community.

Mohith (He/His) is currently a Graduate Student in Women's Studies at Tata Institute of Social Sciences (TISS), Hyderabad. He hails from Tamil Nadu, India. His areas of interest include but are not limited to: Discourses on the Intersectionality of Gender and Sexuality in Politics, Culture, Education, Literature, and History with a Marxist approach in understanding the underlying phenomena. Mohith's favorite pastime activities are reading books, blogging, learning languages, listening to music, writing short works of fiction, non-fiction, poetry, political commentaries on social media, and playing with his cats.